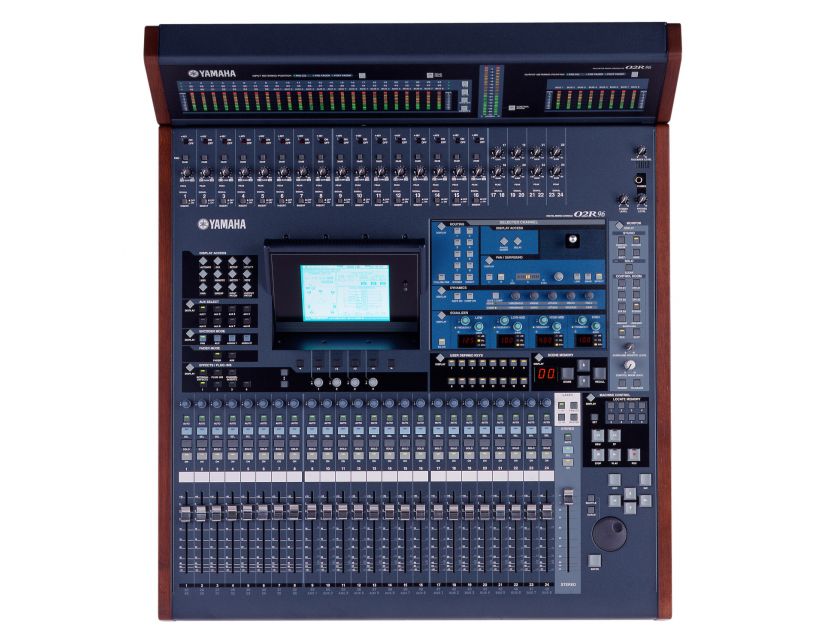 A New Revolution in Standards

The 02R96VCM is a new revolution in a line of production consoles that has evolved over the years in response to user needs become the de facto standard for production consoles: the 02R, debuting in 1995 and a fundamental reason for Yamaha's 2007 Technical Grammy Award, 2002's 02R96, and the 02R96 Version 2 released in 2004.Featuring 56 input channels and 18 mixing busses, the 02R96VCM is backed by the impressive processing power of a custom Yamaha DSP7 LSI and offers the same array of robust channel functions as the DM2000 on its inputs and outputs. Its "selected channel" system fuses the controllability of a digital mixer with the feel of an analog desk for fast, intuitive operation when you need it. The analog input stages on the 02R96VCM feature head amps descended from those of the DM2000, developed with the input of engineers from around the world to provide transparent sound that's perfect for the professional domain.Want more? Take a look at the 5 new plug-in packages that give you both space and creativity in the production workplace. Or consider the digital domain where EQ, compressor, tape saturation and guitar effector VCM plug-ins offer the warmth and depth of analog circuitry. The 02R96VCM also boasts the outstanding REV-X reverb algorithm introduced in the SPX2000. What's more, it comes equipped with iSSP technology that makes creating realistic sound fields easy, giving you functionality within the console that would otherwise require outboard effects.The 02R96VCM also offers a high degree of integration with Digital Audio Workstations, and is compatible with both Windows and Macintosh versions of Studio Manager Version 2, allowing your PC and console to work together seamlessly. Certified to the global THX pm3 standard for surround equipment, it features four MY card slots, whose open architecture design provides compatibility with a slew of I/O formats.The 02R96VCM:a new revolution in a line of trusted digital consoles created to support you in the production workplace.

A Complete Revamp of the Legendary 02R

After its release in August 1995, the 02R rapidly became the de-facto digital console standard for musicians and engineers around the globe. The 02R96 picks up where the 02R left off, implementing the most advanced digital audio technology developed and refined in parallel with development of the top-of-the-line DM2000 console. The result is that the 02R96 surpasses the 02R in every respect: audio quality, processing power, and DAW integration capability. Where the 02R had 21 motor faders, the 02R96 has 25. Other additions include recorder control keys, user defined keys, and dramatically improved operability overall. But since it has the same footprint as the 02R, it can be used as a direct replacement without requiring major infrastructure changes.

Advanced custom DSP7 LSIs feature 32-bit internal processing (58-bit accumulator) at extremely high speed. Full functionality is provided when mixing all 56 channels at 96 kHz. All analog inputs and outputs - including the 16 microphone/line inputs - employ precision 24-bit A/D and D/A converters for an outstanding 110-dB dynamic range. Top-performance head amplifiers provide precise, uncolored pre-amplification prior to A/D conversion, and optimum circuit configurations and parts for all stages of the design were determined through repeated listening tests by some of the best "ears" in the industry.

Although it maintains the same compact desk-top dimensions as the 02R, the 02R96 offers generous mixing capacity with up to 56 simultaneous inputs. All 56 input channels include four-band parametric EQ, gating, compression/limiting, and up to 453 milliseconds of delay with variable feedback. What's more, all of this functionality is available at 96 kHz. The output section also offers plenty of versatility with 18 buses: 8 group buses, 8 auxiliary buses and a stereo bus. Group buses 1 through 6 also function as surround buses, and a Bus to Stereo function allows sound-reinforcement type sub-mixing as well as easy downmixing of 5.1 or 3-1 surround to stereo. Of the 8 auxiliary buses, 1 through 6 can be used as surround effect sends, and there's a "Unity" function that automatically sets the auxiliary buses to nominal (0 dB) level, so they can be used as additional group buses.

All 56 input channels, 8 group buses, 8 auxiliary buses, and stereo bus feature powerful mixing functions including gate and compressor dynamics processing, input attenuation, four-band parametric EQ with a choice of Type I and Type II algorithms, channel inserts, delay, surround and stereo panning, and phase. Easy-access dedicated controllers are provided for routing, auxiliary send, dynamics, stereo and surround panning, and EQ. Control data is graphically displayed via the LCD screen, and can be saved in "libraries" for easy recall whenever needed. All inputs, outputs, insert patch points, direct outputs, and effect sends and returns can be freely patched to configure the system as required via graphical on-screen "digital patching" displays: for example, you could patch one input to multiple channels, or assign the signal from one bus to multiple outputs. The encoders associated with each fader can be used to make input patch and direct out settings, and you can save your patch settings as library data for recall when needed.

The 02R96's four internal effect processors deliver full functionality and performance even when the console is running at 96 kHz. New effect programs such as multi-band compression and surround-compatible 5.1 reverb and 5.1 modulation* augment the console's processing capabilities, and can be used in a send/return loop or as inserts effects.

* Each surround processor may occupy up to four of the onboard effect processors.

Versatile Connectivity for a Wide Range of Applications

24 faders provide access to the console's 56 input channels in three layers: 1 through 24, 25 through 48, and 49 through 56 plus master. Add the stereo master and you have a total of 25 top-quality 100-millimeter motor faders with high 8-bit/256-step resolution. The bus and auxiliary faders are provided in another layer, and a "remote" layer is provided for external device control. A Fader Mode key additionally allows the auxiliary send levels to be assigned to the faders. The rotary encoder and switch associated with each fader can be switched to any of four modes via the Encoder Mode key. The encoders can be used for panning or auxiliary send, as well any two functions you assign. You could assign input patching or direct out assignments to the encoders to allow fast, efficient setup in your specific work environment.

The 02R96 features automix capability with 1/4-frame resolution, allowing full automation of parameters right down to the internal effects. Automix functions can be assigned to the User Defined Keys for easy access. Scene memories allow fade times and recall safe settings to be specified independently for each channel, while recall safe can even be specified at the function level. The supplied 02R96 Editor that runs on the Studio Manager application can be used to manage scene and automix data on your personal computer.

In addition to "horizontal pairing" of adjacent channels, the 02R96 allows "vertical pairing" of channels on different layers so that, for example, you can control up to 24 stereo sources from a single layer. Grouping functions include the familiar fader and mute grouping, as well as sophisticated EQ and dynamics grouping. The latter can be a great advantage when mixing surround sound.

The 02R96 comes supplied with an advanced 02R96 Editor application for Windows or Mac computers. The 02R96 connects to your computer via the TO HOST interface (USB or RS232), creating a production environment that goes beyond simple parameter viewers. The Console Window, Selected Channel Module, Surround Editor, Patch Editor, Effect Editor, Timecode Counter Window, GEQ Editor, and Library Window can be accessed via the computer's expansive color display, and the main mixer functions can be edited offline. Memory management functions allow 02R96 data to be transferred to and from the computer where it can be managed and even shared via LAN or the Internet.

In addition to its extensive stand-alone capabilities the 02R96 can integrate with your computer-based DAW (Digital Audio Workstation) or digital recorder to create an advanced digital production environment. The 02R96 can function as a physical controller for both recorder and mixer sections of your DAW. The standard library includes control compatibility with Digidesign Pro Tools® and Steinberg NUENDO® workstations, and the General DAW mode supports a range of other DAW systems. MIDI control tables can also be created to provide functionality with MIDI-compatible DAW systems.

An Ideal Platform for Surround Production

Surround panning was originally provided on the 02R and 03D, but the 02R96 goes much further with a comprehensive range of features for surround production. The Bus to Stereo function makes it easy to downmix 5.1 or 3-1 surround sources to stereo, and the 3-1 output can be connected via Dolby Surround or DTS stereo encoders back to an 02R96 slot input to allow real-time comparison between the encoded and pre-encoded sound. A panning joystick is provided in the Selected Channel control section to facilitate complex panning moves and trace specified panning patterns. Surround panning features 127 x 127 resolution, and divergence control is possible in 0 ~ 100 steps. Surround-compatible effects in up to 8-in/8-out configurations include 5.1 reverb, modulation, and dynamics.* EQ and dynamics grouping is another feature that can be a great advantage for surround production.

* Each surround processor may occupy up to four of the onboard effect processors.

The 02R96 monitor section provides facilities for muting individual buses (speakers), centralized level control of all monitor outputs, stem mix monitoring, and real-time comparison between the encoded and pre-encoded Dolby Surround or DTS stereo sound. Downmix processing allows 5.1 to 3-1, 5.1 to stereo, or 3-1 to stereo monitoring without affecting the signal sent to the recorder. A Speaker Control function allows fine control of the monitoring environment to match the program material you are mixing as well as your working environment. All of the top-line DM2000 console's surround features have been implemented in the 02R96, including bass management, attenuators for precise speaker level control, and delay for "virtual speaker repositioning".

The new 02R96VCM is the 02R96 Version 2 plus a formidable array of state-of-the-art processing technologies that provide all-new production power. You now have extraordinary recreations of classic compression and EQ units from the 70's, simulations of several legendary analog open-reel tape decks, a complete suite of unmatched REV-X reverb effects, a surround post-production package that is second to none, and even a selection of vintage stomp boxes to spice up your mixes. And all of this is right at your fingertips, with no need to patch in external processors.

The technology that has made all of this possible is some of the most advanced in the world, and the sound is simply superb.

In short, one of the world's most popular digital production consoles just got a lot more powerful.

VCM technology is responsible for the classic compressor, EQ, analog tape deck, and stompbox effect simulations in the 02R96VCM.

"REV-X" is the advanced algorithm behind Yamaha's newest generation of reverb and ambience programs, offering unprecedented reverberation depth and realism with smooth decay. REV-X technology takes full advantage of the 24-bit 96-kHz processing capability of the 02R96 for reverb and ambience effects that have the reassuring warmth and reality of natural acoustic environments.

iSSP technology is the key to the 02R96VCM's incredible selection of surround post-production effects.