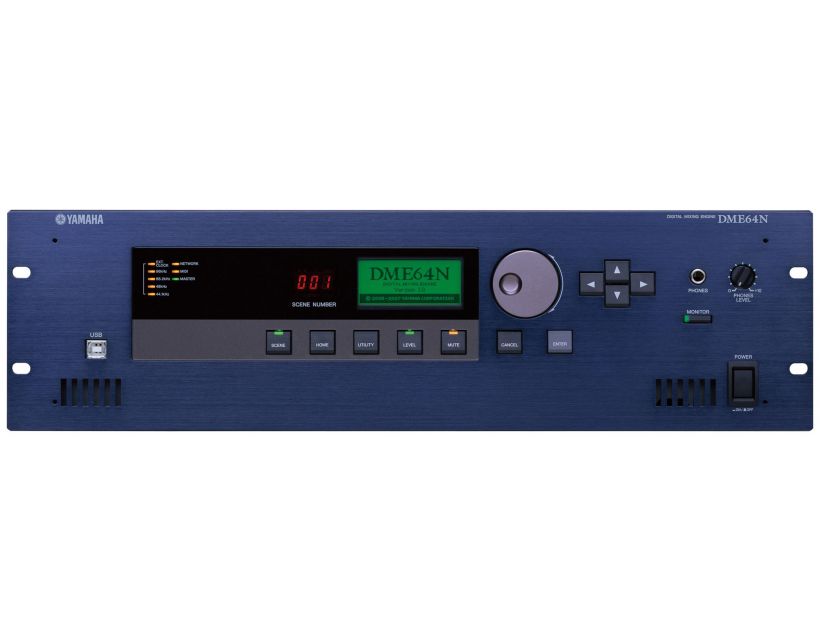 With unparalleled DSP power the Yamaha DME64N and DME24N Digital Mixing Engines offer customizable audio system solutions for a wide range of applications. These versatile mixing engines offer an impressive array of DSP components that can be combined and programmed to precisely accommodate just about any audio requirements - even in highly complex systems. Superior sound quality, generous DSP power, extensive scalability, and network capability - all supported by an intuitive interface - offer unprecedented freedom and efficiency for designing audio systems for installations and live sound.

The DME64N and DME24N employ Yamaha's original DSP6 and DSP7 signal-processing LSIs for extraordinary audio processing power and quality. The DME64N offers processing power that is on a par with Yamaha's DM1000 Digital Mixing Console, and the smaller DME24N has about half that processing capability while offering built-in analog I/O for simple, more compact systems. In either case you get a remarkable amount of processing capability that allows complex systems to be built around a single DME unit and fine tuned for optimum performance in concert halls, multi-purpose halls, event spaces, institutions, and a wide range of other applications. Plenty of DSP power also means that advanced configurations that previously required multiple hardware units can now run comfortably on just one DME64N or DME24N. All of this translates into significant time, energy, and cost savings for the design, installation, and operation of DME-based systems.

It's no secret that Yamaha digital mixing consoles are favored by leading professionals for live sound and studio recording applications. Yamaha DME mixing engines benefit from the same cutting-edge audio technology and attention to details that make a real difference in sound and performance. Both the DME64N and DME24N deliver faultless precision and reproduction fidelity with optimally-tuned 24-bit, 96-kHz digital processing, and the DME24N also features high-performance analog head amplifiers that equal the sound and quality of those found in top-line mixing consoles.

The DME64N has four rear-panel expansion slots that accommodate Mini-YGDAI I/O cards, and the DME24N has one expansion slot. Each slot supports up to 8 analog inputs or outputs when fitted with precision A/D or D/A cards, or up to 16 channels of digital I/O in AES/EBU, ADAT, or TASCAM format. With it's four expansion slots the DME64N can support up to 64 channels of I/O, while the DME24N has a single slot plus 8 channels of built-in analog I/O for a total of 24 channels. For even larger systems up to eight DME64N units can be cascaded to provided a massive 512 digital inputs and 512 digital outputs, or 128 analog inputs and 128 analog outputs.

Selected DME64N and DME24N parameters can be directly controlled from the PM5D Digital Mixing Console for seamless, efficient operation. This capability is particularly useful in situations where the DME unit is located away from the optimum listening position, allowing parameters to be adjusted without having to leave the main console position.

Eight Analog Inputs and Outputs on the DME24N

A network of up to 16 DME64N, DME24N and ICP1 Intelligent Control Panel units can be interconnected via their RJ45 connectors and 100Base-T CAT5 type Ethernet cables. Ethernet connection makes it possible to set up a control network quickly and easily, and with minimum cost.

Both the DME64N and DME24N offer a comprehensive selection of control interfaces for use with a wide variety of equipment. The DME64N has 16 GPI input and output terminals while the DME24N has eight to facilitate interfacing with other GPI-equipped devices. RS232C/RS422 ports allow direct connection to remote control units and computers, USB ports allow direct hookup with most modern computers, and MIDI terminals can be used for synchronization and control with musical instruments, sequencers, and lighting controllers.

Large, easy-to-read LCD display panels and a comprehensive selection of panel controls make the DME64N and DME24N easy to operate. The front panel even includes a headphone jack and level control for convenient monitoring. The DME24N additionally provides signal and peak LEDs for its eight analog inputs and outputs.