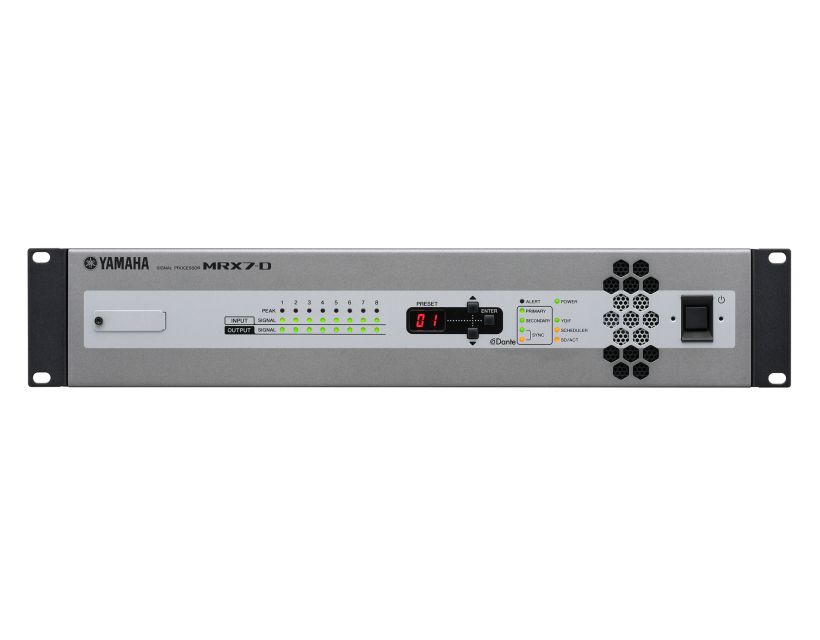 Central Management of Multiple Sound Systems from a Single Processor

Sound system requirements for corporate conference rooms, educational facilities, shopping malls, and a variety of other environments are becoming increasingly large and complex. The MRX7-D offers outstanding control efficiency and flexibility for a broad spectrum of audio installations.

Because the MRX7-D's design architecture is freely configurable, it allows an audio engineer to create a unique solution for the customer which can incorporate many unique processing components and maximize the use of available DSP. Having built in Dante connectivity, it also allows audio systems to take advantage of the many other Dante enable products on the market including Yamaha's wide range of Digital Mixers.

The MRX7-D takes full advantage of the globally adopted Dante networking technology. Dante is a true digital network that increases the flexibility and expandability of an audio system while helping to reduce the cost. It can handle and distribute high numbers of audio channels over long distances to many devices on the network simultaneously. With so many Dante enable devices available, such as microphones, processors, digital mixers and amplifiers, it is the ideal choice for medium to large scale system designs.

The SD Memory Card slot allows direct playback of MP3 or WAV format audio files. These files could be a source for music playback which can be accessed remotely or, they could be preset announcements or messages that are broadcast according to the built-in scheduler function. Lastly, the SD card could also store the chime sounds which are triggered from a PGM1 paging station.

It is possible to add to the MRX7-Ds built-in I/O using the EXi8 and EXo8 Input/Output expanders. Featuring either eight mic/line inputs or eight analogue outputs, they transmit to and from the MRX7-D using Yamaha's YDIF format over distances of up to 30m.

The MRX7-D also features one Mini-YGDAI card slot that can accommodate optional cards that support a variety of audio formats, and expansion by up to 16 I/O channels.

Using two types of networking in MRX7-D can significantly reduce installation cost and time. The combination of YDIF for shorter system connections and DANTE for larger installations can considerably improve design flexibility.

The MRX7-D is equipped with dual Dante ports that allow 64 channels of inputs and outputs @44.1kHZ/48kHz to be run on a redundant network. Both simple and larger, sophisticated Dante network systems can be created using MRX7-D and the Dante enabled XMV-D amplifiers.

Audinate’s Dante Network Audio Protocol has been adopted, not only in Processors and Power Amplifiers, but also in many other types of digital audio equipment such as Yamaha Digital Mixing Consoles. In Ver 3.2 and later, supports the HA control of the I/O rack "Rio series"and "Tio 1608-D".This makes it the perfect backbone for larger networked audio systems particularly as connections are not limited to a 30m maximum as with YDIF, but can carry audio up to 100m over CAT5e cable.

A Dante digital network handles all the audio and control data making system alterations and expansion easy. New devices can be added to the network via a single CAT5e cable and quickly configured using the MTX-MRX Editor. Dante networking provides superior system flexibility as well as plenty of capacity for future expansion.

The PGM1 paging station and PGX1 paging expander are designed to work specifically with MRX7-D or MTX5-D. They work using PoE and connect to the network via Dante. Each PGM1 can be expanded with up to two PGX1 units and up to 4 units of PGM1 can be connected to a single system.