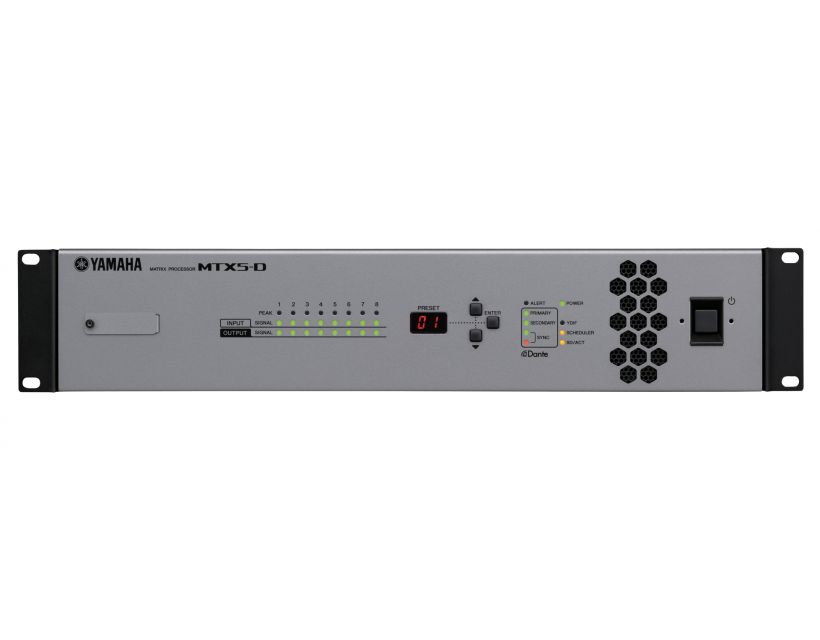 The MTX5-D is equipped with dual Dante ports that allow 16 channels of inputs and outputs @44.1kHZ/48kHz to be run on a redundant network. Both simple and larger, sophisticated Dante network systems can be created using MTX5-D and the Dante enabled XMV-D amplifiers.

Audinate’s Dante Network Audio Protocol has been adopted, not only in Processors and Power Amplifiers, but also in many other types of digital audio equipment such as Yamaha Digital Mixing Consoles. In Ver 3.2 and later, supports the HA control of the I/O rack "Rio series"and "Tio 1608-D". This makes it the perfect backbone for larger networked audio systems particularly as connections are not limited to a 30m maximum as with YDIF, but can carry audio up to 100m over CAT5e cable.

A Dante digital network handles all the audio and control data making system alterations and expansion easy. New devices can be added to the network via a single CAT5e cable and quickly configured using the MTX-MRX Editor. Dante networking provides superior system flexibility as well as plenty of capacity for future expansion.

Central Management of Multiple Sound Systems from a Single PC

MTX-MRX Editor is a software application that is dedicated to the setup and management of sound systems built around the MTX and MRX series signal processors. It can mix audio from microphones, CDs, MP3 and WAV files, deliver different content to multiple zones, set up timer-activated music playback and announcements, and much more. MTX-MRX Editor makes it easy to manage and distribute sound that is optimized for separate areas of a store or facility from a single computer.

The MTX Series feature an input/output configuration that is ideal for a wide range of applications: 8 mono inputs (mic/line), 2 stereo inputs (line) and 16 digital inputs via YDIF. The output side consists of 8 line-level mono outputs and 16 digital outputs via YDIF. MTX processors also feature an SD Card Slot for playback of MP3/WAV files stored on an SD Memory Card. The Event Scheduler function allows you to play back these files as music, announcements or chimes—or even trigger external devices with a GPI output—at scheduled times, as well as recall presets stored within the MTX.