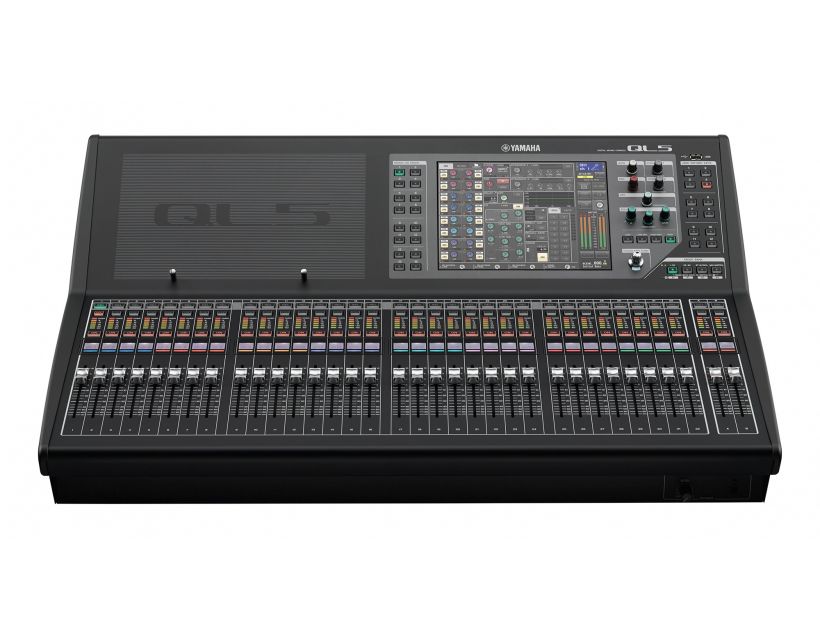 32 + 2 fader configuration adapts to a wide range of channel layouts. The QL5 is a compact console with large-scale capabilities.

The Yamaha sound begins with reproduction that is faithful to the source. QL series consoles feature circuitry and components that have been designed and selected with the utmost care, achieving outstanding audio purity from input to output. With that solid sonic foundation it becomes possible to take full advantage of built-in premium internal processors such as the Portico 5033/5043 created in cooperation with Rupert Neve, to shape and create as required. For a wide range of speech applications built-in automatic mixing functionality from Dan Dugan Sound Design provides optimum channel balance while allowing the operator to concentrate fully on optimizing the overall sound.

The ability to respond swiftly and surely to multiple, rapidly changing demands is essential for effective live sound support. QL series consoles feature large touch-panel displays as well as “Touch and Turn” knobs that make up a remarkably smooth, efficient control interface. Attention has also been paid to details such as fader feel and channel name display visibility in order to deliver a sophisticated overall operating experience. Remote control and offline setup capability via an iPad or computer adds even more refinement to an already state-of-the-art operating environment.

Expandable All-in-One Support for Any Application

In addition to ample analog input and output capacity, QL series consoles feature the same Dante audio networking protocol that provides broad connectivity in the CL consoles. There's also an innovative “Port to Port” feature that can patch any input port to any output port so the QL console can function as a remote I/O device for any other QL or CL series console, for example. Other flexibility enhancing features such as 2-track and multitrack recording capability, and dual MY expansion slots that allow processing capability or I/O to be added as required, make the QL consoles suitable for use as central components in an extensive variety of sound applications.

It All Begins with Natural Sound

In order to take maximum advantage of evolved processing potential to sculpt creative new soundscapes, the engineer must have uncolored, natural sound as a starting point. Yamaha’s unwavering natural sound philosophy is fully implemented in the QL series, resulting in accurate reproduction that is faithful to the source.

Full creative freedom can only be achieved when the sonic foundation is accurate, uncolored, and faithful to the source. The same pure, natural sound that is a highly regarded feature of the CL series is achieved in the compact QL series consoles as well. Every detail, from mechanical construction through port location, power supply, grounding, and individual components has been painstakingly analyzed and brought together in a system that affords extraordinary audio quality. Noise that can affect digital mixer performance in a number of ways has also been thoroughly scrutinized and effectively eliminated. Because it can affect AD/ DA converter performance, system clock jitter has been subject to detailed analysis and optimized by revising the internal FPGA layout and rerouting the clock signal. All of these details combine to realize performance that not only passes the strictest scientific tests, but also satisfies the critical ears of some of the most demanding sound engineers in the business.

When it’s time to build creatively on the uncolored sonic foundation provided by the QL consoles, a selection of powerful processors is ready to refine your sound. Yamaha digital technology accurately reproduces the quality and performance of time-honored analog devices that are renowned for their musical sound, as well as speech mixing technology that revolutionized the industry with unprecedented consistency and clarity. The technology that achieves all of this reflects Yamaha’s respect for the legacy of masters who have given us some of our most valued audio capabilities. It also gives today’s sound engineers the support they need to create for the future.

All of the processing capability that was packed into the CL series consoles is provided in the QL consoles as well. Most of those processors are based on Virtual Circuit Modeling (VCM) technology developed by “Dr. K” (Toshifumi Kunimoto) and his team at “K’s lab,” Yamaha’s stateof-the-art digital technology research facility. VCM technology precisely models the circuitry and performance of analog audio devices, right down to the characteristics of individual components such as resistors and capacitors. VCM simulations are so realistic and musical that even the legendary Rupert Neve, a master who built his reputation on analog sound, has given it his approval and collaborated in developing VCM versions of his Portico 5033 and 5043 EQ and compressor, both provided as on-board processors in the QL consoles.

Thanks to in-depth collaboration with Dan Dugan Sound Design, renowned Dan Dugan automatic microphone mixing with its advanced algorithms is built into the QL series consoles. Setup is easy: just insert the processor into up to 16 channels for automatically optimized microphone gain distribution. Gain control is smooth and natural, as though experienced human operators were doing the mix. The system also effectively reduces feedback and comb filter issues. For speech applications, especially non-scripted situations, this allows the operator to concentrate on details other than fader operation for consistently high-quality mixes.

Operators coming from analog or digital consoles will quickly become comfortable with the QL consoles. Years of accumulated knowhow and feedback from users worldwide have been applied in creating an interface that is simple while providing refined operation that responds fully to the demands of a broad spectrum of real-world applications.

Touch and Turn operation, introduced in the CL series, has been enthusiastically adopted by sound engineers everywhere. The QL series offers the same operational advantage: touch the parameter you want to control on the screen, then rotate the Touch and Turn knob that is below and to the right of the screen to adjust as required. The color displayed below the knob changes to match that of the selected parameter, for quick confirmation and error-free control. It’s simple, responsive, and very intuitive.

The Yamaha Selected Channel interface provides a comprehensive overview of available channel parameters with direct selection capability via its large touch-panel display. The display is the same type that was provided on the CL series consoles, offering high visibility and smooth response for stress free operation. Hands-on control via dedicated physical controllers as well as an innovative Touch and Turn knob provides speedy access to essential QL console parameters for a fast, efficient workflow.

You can have features galore, but if they’re not well integrated into a smoothly operating system that provides easy access, their value will be greatly reduced. Design of the QL series faders and knobs extends to the finest details of form and materials. High visibility channel name displays and colors add to overall operation ease and efficiency as well. The interface is the vital connection between console and engineer, and we have treated it with appropriate care and respect.

The operator’s sonic intent is conveyed to the console primarily through the faders. Inheriting the sports car bucket seat styling of the CL series faders, the QL faders provide comfortable, sure operation regardless of where you finger rests on the knob. Even the fader knob materials have been selected for optimum feel. The sides of the knobs are specially sculpted to allow the fader scale on the panel to be easily seen from just about any angle.

All analog inputs are assigned to one Fader Bank, while other input and output channels are accessed by switching banks. Four Custom Fader Banks are also provided, and these allow the user to set up any combination of channels required for maximum efficiency in any application. Custom Fader setups can also be stored with scenes and instantly recalled when needed.

Although there are as many ways to use a mixing console as there are sound engineers, extensive feedback from audio professionals has made it possible to provide a feature set that is ideally suited to the real-world needs of demanding live sound applications.